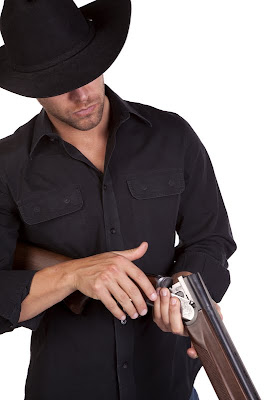 
When Dylan Coulter rides into Sparkling Springs, he quickly discovers the woman who runs the local saloon is worth the risk of facing the hangman. Things get ugly fast when Dylan is accused of killing the only son of the richest rancher in the area. Unwilling to leave her behind, Dylan takes Maggie with him as he tries to dodge bounty hunters and a determined Pinkerton agent who just happens to be Maggie's old love...


Read what the reviewers are saying...

"5 Cups!...Keeps you glued to your seat, reading until all hours. You will discover what someone will do to protect someone they love. This book takes you to the days of the Wild West and gives a whole new meaning to 'Ride 'Em Cowboy.' If you are a Western Lover, this book is for you."—Sherry, Coffee Time Romance

"4 Angels!...An unvarnished look at the 'live by the gun, die by the gun' mentality of the Old West. Maggie is content in her career as a bartender, but when Dylan needs her, she gives up everything to help him out. She?s my favorite kind of heroine?spirited, sassy, and independent. Dylan is a guy in simply the wrong place at the wrong time, but comes to realize that he wants Maggie for more than the short term. A wonderful novella by Denyse Bridger."—Michelle, Fallen Angel Reviews

"5 Moons!...Outstanding! Even though the book begins in a rather typical fashion, it is always interesting. Ms. Bridger is a very good narrator, and she builds a sense of suspense and curiosity about the characters and plot throughout the book. She mixes in some interesting historical facts, and the underlying eroticism between Dylan and Maggie makes the book move quickly and evenly. Everyone who is interested in the post-Civil War era will enjoy this book. There are very well-developed supporting characters in this book as well."—Ruth Moderhak, Mystique Books

At some point in the evening, Maggie had fallen asleep at her work. She was jarred from slumber by the familiar sound of gunshots, but instead of casual interest, this time the sound made her blood run cold. She rose and went to the door that led onto the balcony above the saloon. She opened it cautiously and looking out. Lights were beginning to spark to life in the buildings across the street from the Spur, and the sound of running feet grew louder. She peered at the shadowy alley across the street from Wilkins' Caf?, the alley that had drawn Dylan's attention so many times the previous night, a voice inside her head reminded her. There was someone there now. She caught the briefest glimpse of white, then it was gone.

Heart pounding in her chest, Maggie ran for the door that would take her down to the saloon. She'd just stepped off the flight when there was a low knock on the rear entrance door. Without thinking of consequences, she went and twisted the lock, then opened the heavy panel of wood. Dylan Coulter slipped past her and closed the door.

"What have you done, Dylan?" she asked before she could choose a more tactful way of making the query.

"Do you have any experience pulling bullets out of men, Miss Watson?"

Maggie's knees suddenly felt inadequate to the task of keeping her standing upright.

He stumbled, and she caught him awkwardly, offering what little support she could as he propelled her into the saloon and back to the stairs. Once they reached the short flight, the lamp on the wall halfway up gave her a clear look at him. He was dressed in dove gray tonight, and the pristine white of his shirt was marred by a horrible, expanding stain of crimson.

"You need a doctor, Dylan," she whispered, feeling the color drain from her face.

"They won't send a doctor, Maggie," he said through clenched teeth. "A lynch mob maybe, but not a doctor."

They'd made it to her rooms and he pushed the door open and went to the bed, where he promptly collapsed into unconsciousness. Before she could think more about what was happening, insistent pounding began on the main floor doors. Her gaze went back to Dylan and she obeyed instinct rather than reason...

Coming in 2011 from
Moongypsy Press