In an email interview conducted earlier this week, Mr. Anderson revealed his thoughts on how it felt to win...

"Well, mixed. There were two science fiction manuscripts in the competition, and I am sorry to say mine wasn't one of them. Good science fiction is hard to write. SF writers don't get enough credit for how hard they work to make SF live on the edge. I knew I couldn't do a good enough job of SF in 3 days."

"I'm thrilled to have won, but I also have a great deal of respect for the work other writers turned in."

"One of the prizes is a writing retreat at the Banff Centre courtesy of the Writers Guild of Alberta. The Centre is where I wrote the first draft of "Resisting Adonis" ... It will be a joy to return to the scene of those crimes and spend a week working on a project." 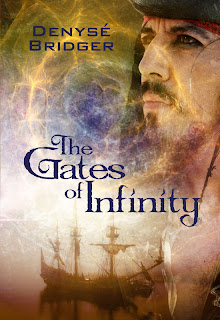 Thaer is a world that mirrors our own, but in many ways it is both the past and future of Earth. Magic and sorcery are commonplace, and beneath the vast sands of Cairos and the waters of Venicia, lie secrets that may hold the key to travel between worlds and time itself. All things are tied to the presence of a legendary pirate captain, a skilled mage, and a sorceress who has never known her true origins.

As the spells weave amid treachery, and betrayals both known and unknown, the tempestuous storm gates are opened and salvation or destruction looms in their swirling, fiery depths. Will time be turned inward, or can the Fate of two worlds truly rest on the success of a terrified reporter from modern day New York? A woman whose fate was written in another world and time, and who now holds the key to the unpredictable power contained within the Gates of Infinity?
This is my next release from Liquid Silver Books, and if you'd like to read an excerpt, click on the publisher link above. I think this one is going to be very good, and I hope you'll really enjoy the adventure once it's released!
No comments:

Hi there!
I’ve just done a new interview with Love Bites Romance Reviews. Aside from interviews, this site is loaded with wonderful extras and things for all readers of romance to enjoy, so do take a few minutes and have a look around!
My interview can be read by clicking on the banner above. Don’t forget to let me know your thoughts on things, as always!!
No comments: 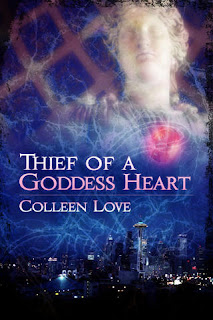 Ivy Jones has had a challenging life. She's learned to distrust men, and has sworn off the male population, she firmly believes she has no use for a man. Even her cotton candy pink chopper is a not-so-subtle defiance to all things masculine.

As an Archeologist, Ivy is excavating in an ancient temple and has the good fortune to make the find of a life time-an intact and perfect Athena. But the statuette is more than it appears, there's an ancient curse associated with the Athena-a curse that lies in wait, to be discovered by a believer of the Goddess herself. It takes possession of Ivy and life begins to take on some unexpected twists. Aside from the fact that she can't leave the statue for long without ill affects, things get steadily worse when The Athena is stolen and she is forced to rely on a smooth and persistent man on whom her life may depend.

Dane Knight knows trouble when he sees it. As a Navy SEAL turned Private Investigator, he has encountered more then his fair share, and has sworn off taking any new cases. Until the theft of The Athena is brought to him. He's drawn into the assignment, unable to resist, especially after he meets Ivy Jones, the Museum's Head Curator. Dreams haunt him, dragging him deeper into the case, and he begins to soothe her angry, neglected spirit. As she learns to trust him, he begins to peel back the layers, and soon discovers there is more to the case than a mundane theft.

Working together Dane and Ivy do find the statue, and Ivy discovers something more precious than anything else, the cure to her curse.
No comments:

Jack The Ripper -- So, did that get your attention?

Seriously, if you have an interest in the infamous Ripper, you might just enjoy my mystery/romance series The Devane Files. Set in Victorian London, a few short years after the Ripper murders, this set of stories/books introduces you to the fictional Inspector Michael Devane. Devane is a complex hero, flawed, scarred emotionally, and suffering the tortures of opium addiction and clairvoyance.

In the first book, OUT OF HELL, Devane is called upon to investigate a gruesome murder in the Kensington district. When he meets the not-so-grieving widow, Michael senses a soul-mate worth living for, if he can prove she’s not the one who killed her husband.

Book Two is AN UNSPOKEN BETRAYAL, and once again, the roads of a current investigation into blackmail take Devane back to the streets of Whitechapel and the ghosts and memories of the infamous, unsolved Ripper murders. As he delves into the present case, things surface that make him wonder just who the Ripper was, and if he is indeed, still alive, and known to the police department that was meant to catch him and stop him?

To read excerpts from these books, please visit my website, or here to read reviews and purchase information.
No comments:

Blood Wine and Pales Roses (novella) that features a lonely artist who finds inspiration and danger in the eyes of a ghost who is much more deadly than she could ever have imagined.

The Hunt (short story) takes you to an underground Goth bar, and the two decadent and passionate vampires who are seeking prey and pleasure as they indulge their twisted longings.

Whom Gods Have Favored (novella) is a trip back in time to the ancient city of Pompeii, where a proud General of Rome finds life and death with a devoted slave girl he buys at the market on a whim.

Storm-Singer (short story) moves into the world of Nyx, to an isle inhabited by a dark Prince and his consort, both of whom are creatures not quite human, but with all too human needs and desires.

These four books are the titles of A World In Darkness, now available at Amazon.com

ALSO AVAILABLE are the following tales of dark desire:

Descent Into Darkness is my first full-length novel, and it’s a story that transcends time, moving from the ancient world of Mesopotamia, to modern San Francisco, where a master vampire catches a glimpse of the woman he once loved and abandoned to an angry mob in Colonial America. As he draws her back into his seduction web of deception and madness, history begins to repeat itself, with deadly consequences.

Alchemy (short story) combines the ageless appeal of pirates and vampires, and begs the question, do vampires dream as they sleep and if they do, what do they see?

Join me, and find out!! All these titles, and their “previews” are available on my website. Click on the link below and take a few minutes to explore the darkness… You might find something sensual and alluring waiting in the shadows for you…

Click here to learn more about my Vampire Tales

The beautiful cover art for A World In Darkness is available as a desktop download from my site as well: Click here
No comments: 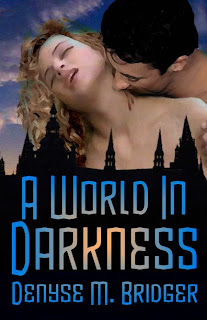 For some reason, Amber Quill Press has decided to dump this book from their site. So, for anyone who would like to get a copy of the paperback, it looks like Amazon is it. If you click on the image, you'll be taken to the right page.
A World In Darkness is an anthology collection of four of my best rated vampire tales, and I hope you'll enjoy them. If you like sensual, driven, obsessive vampire lust, then this is definitely the collection for you to indulge in!
To check it out, or offer a review, click here, or on the image to the left!!
1 comment:

Shainna Barton has long struggled with her feelings for Adam, her partner in assignments by the Company. As worried as she is that Adam has turned to her only in grief because of Kiku's death, though, she can no more resist the desire he so expertly arouses in her than she can refuse his request to cover for him in his mission of vengeance.

Excerpt available at my website or at New Concepts Publishing
No comments:

Preview excerpt from AS FATE DECREES

I've just posted the Prologue of my forthcoming Greek Mythological Fantasy novel, AS FATE DECREES. The entire first chapter is now available for you to read at my blog in MySpace. Feel free to comment! This book will be my first mass market paperback, and it's very exciting to see how things are being prepared for the launch! That's still a few months away, but I can't wait to see it happen! If you have any comments to offer, as always, your thoughts are very welcome. You can reach the excerpt via the link below.