4 Angels: Adam Walker had always been a touchy subject for Shainna Barton. As her assigned partner by the Company, he was one of the most dangerous men she had met. The moment she saw him there was an instant attraction. He had a certain aura to him. Then again there was Kiku, and Shainna knew as long as Kiku Shimoda was in the picture, Adam would never be but a working partner to her. When Kiku is beaten, raped and her neck broken, her death becomes national news, leaving some to believe Adam was the killer. Shainna is certain he is innocent. Adam is well-trained and considered one of the Company’s best field agents. Inside, he carries a secret that others are not aware. He is a ninja and one of Japan’s death warriors who loves Kiku. After her death there is only one person he can lean on for support and that is Shainna. He never realized that deep down he harbored stronger feelings, for her that are about to surface in a most sensual way.
Silent Death is a story that pulls one into the action. The suspense mounts especially after the death of Kiku. Shainna and Adam are both refreshing characters that light up the pages. I liked how the marital arts was brought into the story and showed different sides of Adam. This reader could see the different layers of expression on his face with, grief, action or passion. Denysé Bridger packs a punch into a tale that shows love, compassion and wide ranges of emotions while finding a way of escape for a brighter tomorrow. I look forward to more of her stories.
Reviewed by: Linda L.
Fallen Angel Reviews
Buy it HERE
No comments: 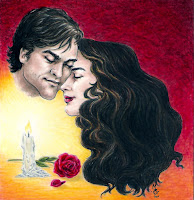 I just wanted to let you all know that I've just posted my newsletter, on the theory that it's better late than never, right?
Lots of cool stuff to explore in this issue, so if you're not subscribed and would like to be, here's the link.

AND, if you want a copy of the newsletter once you've subscribed, drop me a note and I'll get one out to you straight-away!! 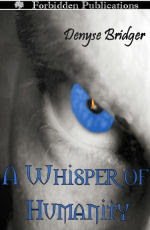 When Detective Faith Prentice is assigned as a liaison to the police force in Montreal, intent on helping the detectives there capture a killer who’s MO matches one she’s hunted at home in Los Angeles, she is ill-prepared for what awaits her in the beautiful jewel city of Canada’s French province. Mysteriously drawn to her temporary partner, Adrian Blackthorne, she rebels against his allure, only to be drawn into an even deeper darkness when Adrian’s past snares her—and she becomes a pawn in the deadly battle between the vampire Blackthorne and the powerful master he has long denied…
Read an excerpt here
No comments:

Drop in and have some fun!

I'm "on" today at the Romance/Erotica Writer's Blog.... and I'd love to hear your thoughts on today's little mindless amble... so pop over and comment, and at the end of the day I'll spring a surprise on someone!!

The topic is: Music as Creative Motivation

Thanks!
Have a great one, folks!!

Another Man’s Wife by Denysé Bridger is an engrossing short story based on the premise of coincidence. Elizabeth Davis just happens to be on the same stage as Federal Marshall Chris McQuade. It’s a coincidence that over the course of many days all the rest of the passengers disembark, leaving the two of them alone in the coach to surreptitiously stare and speculate about the other. Although the story is fairly brief, author Denysé Bridger packs in plenty of romance, action and gunplay – frontier justice style. Bodies fall left and right but the violence is essential to the plot and fortunately not graphic. There’s a great scene of McQuade and Elizabeth getting busy on the bedroll that brings new meaning to the phrase, coitus interruptus. If you like a good Western tale like I do, you’ll enjoy Another Man’s Wife.
No comments:

This was supposed to happen on September 13th, at 6 PM (CT), but is now rescheduled for October 18th, same time!! I will be the guest author interviewed for on Internet Radio for the University of Regina. This is one more part of the promotional work for As Fate Decrees, which is in stores now -- all over the US and Canada!
To connect, visit the website here: http://www.cjtr.ca/, and click on Tune In. The interview will be audible via your Windows Media Player, or your MAC system's Media Player. Interviews are broadcast live with streaming audio.
I hope you'll tune in and let me know your thoughts, as always.
Thanks!!
No comments:

SEx: http://www.liquidsilverbooks.com/blog
Talk to you soon! 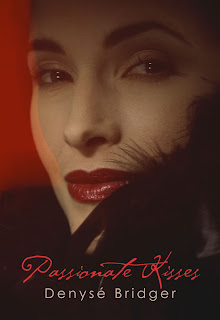 Passionate Kisses is a collection of seven short stories, three of which have been previously published. In this single volume you’ll meet agents who risk not only their lives but their hearts as they struggle to survive in an often harsh and heartless world; a jaded Colonel returning from the Civil War who finds solace for his soul in the arms of woman he’s just met; a vampire who unknowingly condemns all of his kind to the eternal night; a couple who live busy lives that often keep them apart, so they make their own special magic hidden away in the mountains

ANY OTHER WAY, (Contemporary, previously published by Amber Quill Press): Protected Federal Witness, Carlos D’Alejandro and Agent Jade Whinton have had a relationship of convenience over the years, but when the people they love are killed, these two unlikely lovers are forced to face a truth neither of them has been willing to examine too closely, that their passion is more than intense attraction…

DESTINY MET (Post-Civil War): As the soldiers of the defeated Confederacy slowly make their way to the broken South, a jaded hero finds unexpected comfort in the arms of a lovely woman who has waited a lifetime to meet her destiny…

BOUND (Contemporary, previously published by AQP) : Halloween is the setting for a very private party between two lovers, one of them a world-class, sophisticated intelligence operative who’s trying to teach his young and innocent lady that curiosity can sometimes take you places you’d be better not to go…

PERDITION (Historical vampire): Set in the ancient city of Alexandria, approximately 300 B.C., a High Priest in the Temple of Ra is seduced by an enigmatic woman who gives him immortality. Later, in the court of Pontius Pilate, at the trial of a man revered as the son of God, the Priest whispers a word of advice into the wrong ear, and condemns all of his kind to an eternity in darkness…

1-900-SURPRISE! (Contemporary): Late home from a Congressional Hearing, agent Martin Fowler decides to introduce his young lover, Daniella Renault, to the intimacies of sex via the telephone…

THE HUNT: (Contemporary/Vampire, previously published by AQP) Nicholas is ancient, and his current lover, Callandra, is one of the few women he has known over centuries who not only enjoys the hunt, she glories in it. Tonight, their lust for blood and each other will take them to a murky underground nightclub, where the vampires will quench all their hungers...
I hope you enjoy this collection of tales both erotic and highly sensual. Let me know, okay?
AND, don't forget that my first major print release is now available in bookstores everywhere! As Fate Decrees, a new fantasy novel based on the mythology of Ancient Greece! It's also available online direct from the publisher, (who is offering FREE shipping in North America), and at Amazon.com and Amazon.ca! Details on my website!!
Denysé
No comments: