And the WINNER of the ring is...

Rhonda D. is the winner of the Vampire Diaries ring. E-mail me, Rhonda, and we'll get your ring in the post to you ASAP.

BUT, since you were all so wonderful, email me HERE if you'd like this set of laminated bookmarks? I'll mail them out to you on Monday.

Please use Vampire Diaries Blog Contest in the Subject line of your messages everyone - thank you. 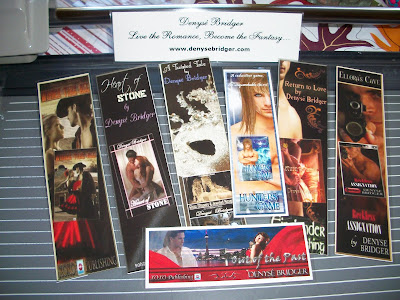 Thanks so much everyone for playing! And, later this month I'll be giving away another lovely piece of jewellery so watch for that contest!!

Have a fabulous weekend!!

**If the ring isn't claimed by next Saturday, I'll draw a new winner. 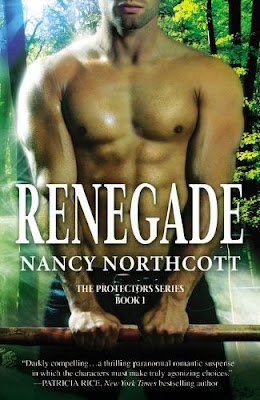 Northcott Brings Romance, Suspense and the Paranormal to RENEGADE, the
First Book in her The Protectors Series

"A new writer to watch...I loved Renegade, and you will, too."
- New York Times bestselling author A.C. Crispin

RENEGADE, the first novel in three time Golden Heart Award Finalist Nancy Northcott’s The Protectors series, introduces one of Collegium council’s top sheriffs, Valeria Banning, the mage council's sheriff for the southeastern United States. Valeria doesn't just take her job seriously, she takes it personally. So when Griffin Dare, a notorious fugitive sworn to protect innocent Mundanes and mages from dark magic, risks his life to save her, she has to wonder why. To find the answer, she'll put everything on the line, starting with her heart.

Before Valeria can recover from the attack that almost killed her, evil forces are moving against them. Soon,  they're fighting side by side. What they are doing is forbidden, and when the council discovers they are working together, Valeria and Griffin  must run for their lives, and not just from the law.  Danger threatens at every turn  as they try to prevent the advent of a ghoul takeover, and struggle to find the traitor they believe is betraying the Collegium and working with ghouls to send unsuspecting mages to their death.

ABOUT THE AUTHOR: Nancy Northcott has been a lover of comic books, science fiction, fantasy and romance since childhood.  An attorney, she left that profession to teach at the college level and to write. Now, she combines her passion for romance and high stakes in RENEGADE, her first published novel and the first book in her contemporary mage series.   She continues her story in GUARDIAN, which will be published in May 2013.

Nancy lives with her family in North Carolina.

Excerpted from Nancy Northcott's RENEGADE, Book 1 in the Protector Series

Fire seared Val's eyes. With a gasp, she jerked upright, trying to open them.  Pain flashed through her body. She choked down a cry and fell back.
At least she landed on pillows and a soft mattress. Definitely not ghoul hospitality.
"Easy," a man's deep voice said at her side. A callused hand closed gently over her clenched fist. Mage power resonated in the touch. Like sunlight in her blood, strengthening power flowed from him. "You're safe now."
Truth also vibrated in his touch. Along with...worry? Regret?  Before she could probe, his hand withdrew. She couldn't sense anything now.  He'd locked down his power and his emotions. She forced herself to relax.
Her eyes wouldn't open. She raised a hand to her face and gasped at biting pain in her shoulder. Her fingers touched linen. Bandages. The air smelled of lemon verbena and lavender, healing scents. Homey ones, with a hint of bay leaf for protection? on the pillowcase. Not hospital smells. A droning noise and a stream of cold air hinted at a window air conditioner.
"Venom in your eyes," the man said. "Sorry I can't heal them fully, but at least there's no organic damage."
His deep voice gave her a tingly sensation, like velvet drifting over her skin, and warmed her inexplicably. She pushed herself up to sit.  The movement hurt pretty much everywhere, but she felt at a disadvantage lying down.
He banked pillows behind her. Awareness of him, pleasant and also somehow familiar, prickled over her skin.
"I'm Kyle Connor," he added. "You're at my home near the swamp."
"Valeria Banning." She offered her right hand. He took it in a warm, firm grip but released it too soon for her to probe. Yet the vibes of his magic felt familiar. "Have we met before?"
"We had a couple of reeve training classes together before I chose a different career. Do you remember the fight?"
Ghouls. A tall, brave mage, who looked, who fought, like...but Griffin Dare had no reason to help her and every reason to let her die. With the damage to her eyes, she hadn't seen the man clearly. Maybe Connor only resembled Dare, with the same height, lean, broad-shouldered build, and jet-black hair. "I assume you rescued me. Thank you, so very much."
Yet cold fingers of unease pinched her throat. Though her vision had been blurred from the injury, she'd seen that the man fought with a quarterstaff, an antiquated weapon almost no one used. In the Southeast, where people spoke with his accent, only Griffin Dare wielded one. She had best tread carefully. 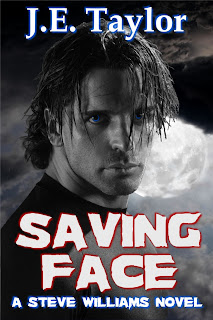 I am writing this four days after hit the East coast. I’m one of the more fortunate people that is far enough inland in to not have a huge impact this go around. The biggest impact we had at our house was a flicker of electricity on Monday evening. That isn’t true of the other side of our town which was out of power for a few days and schools were closed through Wednesday. Even so, for us this weather event was a far cry from last year at this time when we were crippled without electricity for a little over two weeks by the same type of snowstorm that hit with .

As I watch the news and the devastation up and down the coastline from through the shores of , I’m astounded at what Mother Nature can do. I don’t ever remember being as crippled as it was in this storm. The idea of an entire tunnel being flooded like the one from Brooklyn to the is one that brings nightmares to mind. The mayor was smart getting people out of the city so early.

Can you imagine if they had scoffed at the weather reports and that tunnel filled during rush hour?

Well, as a horror and suspense writer, this what-if scenario brought forth a great many unwanted visuals in my mind and they were just as disturbing as the actual devastation viewed on the news lately. The flooding, the black out in the city, days without power, food, water and even gas in some places drives a great deal of fiction ideas, which for me, lands on the side of chilling.

Beyond the flooded tunnel, one of the ideas this has sparked in my mind centers around this question:
What would happen if the power grids in were shut down for good?

I shudder at the possibilities this particular situation would bring forth, and yet, I can see a compelling story surrounding that type of catastrophe. A brilliant ‘What If’ that has been explored many times before, but my flavor of this would be revolved around the darker of the human elements.

So, along with a glimpse of the dark ideas this disaster brought to my mind, it also brought the sorrow for the losses people in those areas suffered. Remember, things can be rebuilt, lives can’t. You all are in my thoughts and prayers. I wish you well.

Thanks for listening to my ramblings today and I hope you are safe and surrounded by loved ones in the wake of this disaster.

In the meantime, check out my new Steve Williams release, Saving Face:

The Windwalker Serial Killer stalks the inlets of southern Maine for the next beauty to advance his collection and Special Agent Steve Williams is frustrated with always being a breath behind the slippery psychopath.  Escalating the pressure, Steve’s adopted sons, CJ and Tom Ryan, take teenage rebellion to an entirely new level, leaving Steve in an explosive situation.

When the Windwalker slaughters Tom’s ex-girlfriend, taking her face as a macabre trinket, Tom is found on the scene covered in her blood, with her scalped body draped across his lap.  Damning evidence against him is unearthed, his father's secret identity is about to be exposed, and he's charged with Tanya’s traumatic murder. To prove his innocence, their only hope is the worst-case scenario; for the Windwalker to harvest a new face.

Yes, this is the prize up for grabs - a lovely replica of a very special ring featured in THE VAMPIRE DIARIES.

All you have to do to win is answer the following FIVE questions, and if you choose to answer the sixth question, you qualify for a Bonus Prize of the eBook of your choice from my catalogue.

I will pick a winner next Saturday. So, one week from today - and this is open to everyone, no restrictions on country. For the duration, all comments will be moderated, so you can put your answers into a comment, and I'm the only one who will see them. At the end of the week, I'll make the draw, announce the winner, and all the comments will show on the site here.

Thanks, and have fun. I bought this ring from a dealer in Hong Kong, via eBay, and it's truly lovely. It is adjustable, so it will fit anyone. I'll ship it in the box you see in the photo.

Good Luck to everyone - and have fun!

How many novels were in the original series of books?

What are the two Unofficial books about the television series?

What is the name of Ian Somerhalder's Charity Foundation?

How many titles are listed on my website as specifically "vampire" in genre?

Of my current releases, which one fits this category?

Bonus Question: Who designed and created my beautiful website?