What do you think of this?

Wendy Wax's Accidental Radio launches with Laura Lippman on May 15

NATIONALLY BESTSELLING NOVELISTS TELL WENDY WAX, AUTHOR OF THE ACCIDENTAL BESTSELLER, ABOUT THE ACCIDENTS THAT HAVE CHANGED THEIR LIVES ON ACCIDENTAL RADIO, LAUNCHING FRIDAY, MAY 15

The connection between the theme of the interviews and the book itself is a strong one. The novel focuses on four women friends, all writers, and the series of unexpected events that change the direction of their lives and lay the groundwork for a runaway bestseller. Wendy jokes that in THE ACCIDENTAL BESTSELLER, a bit of a roman a clef about publishing, “the names have been changed to protect the innocent.”

Prio r to becoming a writer, Wendy worked for the Tampa, Florida PBS station, WEDU-TV, behind and in front of the camera. She was also known in the Tampa Bay area as the voice of Desperate & Dateless on WDAE radio, and nationally as host of The Home Front, a magazine format show that aired on PBS television affiliates.

In addition to the writers already mentioned, bestselling and award-winning authors Karen White, Susan Crandall, Mary Blayney, Wendy Corsi Staub, Marcia King-Gamble, Emilie Richards, Beverly Barton, Ruth Ryan Langan, and Mary Burton are also on board to share their stories of unexpected events that made a difference in their lives.

…as they talk about the ACCIDENTAL events that changed their lives!

*Wendy’s THE ACCIDENTAL BESTSELLER on sale today!
No comments:

Modern Italian Network is an online community for people passionate about Italy and Italian culture.

So, the first book of my set is called "Bella Signorina" based on a song by Patrizio Buanne. A friend fond a wonderful review and I wanted to share it with everyone, so I've enclosed the link. Each of the seven stories borrows its title from a romantic Italian love song.... The next one is "Come Prima" later this year. So thank you to Colleen, who found this....

Just in case you didn't see it yet, I thought I would send the link your way!! :)

It would definitely make my day happier!! :)

Stay tuned for a great GIVEAWAY of a fabulous new paranormal book called BLOODY GOOD!! A new novel that Publishers Weekly (starred review!) and RT Book Reviews (four stars!!) have already chimed in and are saying wonderful things such as “sparkling,” “intriguing,” and “romp.”

It’s going to be a bloody good summer!
I'll be giving away TWO copies of this book in the coming weeks, so watch the blog for your chance to grab your copy!!!
ABOUT BLOODY GOOD:
The battle begins in Georgia Evans’s supernatural trilogy with the June publication of BLOODY GOOD. Set in World War II England, readers meet Dr. Alice Doyle. Between evacuees and Brytewood’s residents, Alice already has more than enough to keep her busy in the tiny hamlet when she suddenly the threat of war is even closer than she thinks. German agents have infiltrated her beloved countryside. These Nazi’s can fly, read minds and live forever. They’re not just fascists. They’re vampires.

Alice refuses to believe there is anything supernatural going on. But when corpses start appearing—sucked dry—she has no choice but to change her thinking and accept help where she can get it. If that includes a Conscientious Objector who says he’s no coward and her very own grandmother, a sane, sensible woman who insists she’s a Devonshire Pixie, so be it. Alice is ready to do whatever it takes to defend home and country from an evil both ancient and terrifyingly modern.

Herbert Howard Jones was born in London in 1955, and went to Eccles Hall, a boarding school in Norfolk. He left after a couple of years and attended IIford County High School in Barkingside where he where he met Bram Tovey, now conductor of the Vancouver Symphony orchestra, and pianist Derek Smith who later played with the Johhny Dankworth ensemble. They inspired Jones to take up music, which he still practices today.
Jones attended Lisburn college in Ireland and then worked in a wide variety of occupations. These included in law, as a porter at the BBC, in jewellery manufacture, publishing, and commercial art. As a BBC porter he was required to hump equipment between studios and could be spotted riding shotgun around London in the old green BBC vans of that time. He was eventually sacked for lateness!
He then found a job in a Hatton Garden jewellery firm in London. As an apprentice jeweller he was required to assemble twenty-two 14 carat gold gate bracelets a day. In the two years he spent in the business he had personally made nearly 12000 bracelets, which was quite a feat, but was mind numbing work, and not something he wanted to do with the rest of his life. At this stage he didn’t know what avenue to go down next.
But the clue lay in his early life. As a young boy, he showed an early interest in the arts, particularly writing, musical composition and painting, and has pursued them as interests ever since. At this time he met the daughter of the captain of the Titanic, which sank in 1912, and consequently became obsessed with the myth which surrounded the subject. Jones remembers handling Titantic artifacts in the lady’s cottage country, and thinking that they made beautiful art ornaments! They inspired Jones to start creating collages using old bric-a brac, attaching small objects to canvas and applying paint to them.
In his teens, Jones lived with the family of author Julian Branston, whose mother was a close confidant of British comic Kenneth Williams. They introduced Jones to writer and poet John Pudney, famed as the author of wartime poem ‘For Johnny’. As busy as he was, Pudney would give kindly critiques of Jones’ earlier writings, urging Jones to say ‘more with less’. Jones described his writing efforts at this time as pretentious and undisciplined, and was frankly lucky, that ‘Pudney gave him the time of day,’Jones found John Pudney fascinating as, among other things, he knew Pablo Picasso personally, having met him as a reporter during the war. To the aspiring and awe struck Jones, this was all glamorous grist for this artistic mill. At this time he became fascinated by celebrity, which was hardly surprising considering that his benefactors frequently had prominent people down to dinner, including the Bishop of Liverpool and others.
When Jones worked for a firm of ‘showbiz’ solicitors in London, he ran errands for screen star John Mills, and composer Tony Hatch, but felt that life as a London commuter just wasn’t for him, and so he ‘dropped’ out and went to live in Deptford. Jones justified this to himself by saying this was his ‘down and out in Paris and London period’.
Jones moved around South London and finally settled in some lodgings in Lewisham which were also being occupied by the now international artist David Mabb, presently Head of Masters at Goldsmith’s college, from whom he acquired wonderful discarded art pieces. Mabb’s charismatic and confident personality had an inspiring effect on Jones who began to look at art in a new light. In Jones’ eyes, David Mabb was ‘one of the solid group of British artists who are exponents of a new kind of socially responsible art, which is dynamic and very much at the cutting edge.’ In Jones’ view, Mabb’s art not only succeeds powerfully as a room decoration, but it invokes a strong visceral response in the viewer. If Jones was going to paint, he wanted his art to be as eloquent as Mabb’s! At the time of writing, Jones is still struggling to achieve this goal. Jones cites US artist Ron English, as his other influence.
Meeting well known people and those active in the arts and entertainment industries had the effect of shaping Jones’ view of the world, and he vowed that one day, he too would make a contribution. It was only in his fifties thatJones has seriously sought publication. The Pyewiz and The Amazing Mobile Phone is his first book.At the present time Jones is busily writing his second book and is painting. He hopes to have his first exhibition of art in London in the near future.Jones’ most thrilling life moment: ‘being six feet away from Frank Sinatra when he came to the London Palladium!’
You can visit his website at http://www.science-fiction-fantasy.com/ 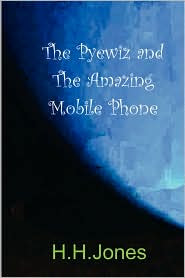 Journey to a frozen planet to find a long lost twin. An amazing crystal phone with incredible powers. A cunning old pirate wizard who must be stopped.
Schoolboy Terry Mctrain thinks the new tenant in his parent's guesthouse is strange. Stranger still is the reason why she is here. Then Terry learns about a twin brother he never knew he had, kidnapped by a pirate wizard years ago. Baffled by all this, Terry realizes there's a mystery to be solved, and a secret to be uncovered. But when he discovers that the fate of the world is also in his hands, he wonders...
Could this turn into the adventure of a lifetime?
Perhaps, but unless Terry and his friend Will travel to the other side of the solar system to solve this puzzle, there's a danger that the world would be destroyed, and his twin brother lost forever.


GUEST POST:
Scribe or subscriber, which?
May I thank Denyse Bridger for giving me the chance to say a few words on 'ye very ancient art of fantasy writing.' Firstly, I have to admit that I prefer reading it to writing it, and this makes me more a subscriber than a scribe! You see, I can't help feeling that when I write, I am in fact regurgitating a lot of stuff that I have somehow absorbed subconsciously. Another admission that I have to make is, that I don't believe I'm capable of a single original idea! Nope, not one. The only ideas that I come up, that have any semblance of originality, appear to be hybrid ideas! This is two or more ideas brought together under the same umbrella, forcibly or by dint of logic, and then mercillously exploited by the writer for all they are worth! The more logical the bond between these scraps of ideation, obviously the better, but I can't help feeling that this is the only way I am going to reinvent the wheel. Truly this generation of writers really has a hard act to follow, and I'm referring, of course to the authorean genius of yesteryear. But perhaps someone like C.S Lewis didn't have to try so hard because so many obvious ideas hadn't been exploited yet. He could take his pick of them, but typically, being a medievel scholar (or rather a scholar of medievel literature), he chose to base his stories on medievel concepts, ignoring the vast pile of modern ideas that he could have utilised. Cleverly his Nania books were written allegorically, basing them on the planets, as they were viewed by the mevievel mind. But fifty years ago the intellectual landscape was still relatively uncluttered and was very much like an uncultivated farmer's field. Today, it looks over-ripe and I'm wondering where the really clever writers are going to husband their next big harvest. Having said that, I can't help feeling that we're all experiencing the golden age of the novel. Novels written by humans that is. It will all come to an end when computers start knocking them out. After all, everything else in Orwell's 1984 has come true!
9 comments: