Every day over on Facebook, probably the world's most popular social site, an amazing and creative energy is being shared with thousands of avid and devoted followers. NY Times Best-selling author Shayla Black was approached recently by role-players, those often brilliant actors who bring to life the favourite and much-loved characters from popular fiction. Some authors are actively against what the players do, but some of the smarter ones, like Ms. Black, recognize that when it's done properly, role-play can be a godsend to an author. The Doomsday Brethren is blessed by some of the best role-players active on Facebook, and the stories they tell hold their readers enthralled on a daily basis. The pages boast well over a thousand followers, and that number grows every day.

One of the most poignant of the love stories that form the backbone of Ms. Black's series, is one that involves three strong and passionate characters. This week, one of the players created a beautiful video, it's posted here. So, take a moment and enjoy the video, and then drop over to your Facebook page and see what magic is taking place on the group pages! Enjoy....
"New and improved love triangle for Lucan MacTavish-Doomsday Brethren, Anka MacTavish-Doomsday Brethren, and Shock Doomsday-Brethren. Lots more images added and more of the story is told!"
You can join the Doomsday Brethren Group HERE 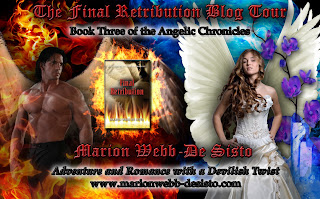 Does love really conquer all? Can even evil be overthrown by the need to love and be loved? This final book of the Fantasy trilogy explores the ultimate retribution of the archangel, who fell from grace and became the Devil. Will he win the love of the beautiful Angel Manah and be restored to his former glory, or is he ruined for all of eternity?

If you, the reader, enjoy a tale of adventure, romance and trickery, then Final Retribution should keep you happily engrossed. Archangel Samael may be the anti hero of this story, but we all love a villain, who is handsome, charismatic and skilled in the art of romance. Such a character can tempt even the most virtuous of us.

Samael’s hand moved up to her hair and removed the comb. As her long tresses draped around her shoulders, he informed, “I have no desire to further discuss the Source. Instead, let me show you how pleased I am to have you back here with me.” He tilted her chin, brought his face close to hers and thought-whispered, “Do you know how to kiss, Angel Manah?”

Now, pure panic took hold of Manah. Angels had told her about the different ways in which humans expressed affection, and she had seen Toa and Belu kiss. Therefore, she knew it was an intimate action. The seraph squirmed away from the archangel, pushing against his arms and wings, trying desperately to get off his lap. “Let me go, Lord Samael! I know how humans kiss and I do not want you to do that to me.”

He kept a tight hold on her with one hand while he cradled her head with the other. As his face drew close, Samael declared, “But I wish to kiss you, my little angel.” He slightly tilted his head and his lips touched hers. At first she could barely feel any contact, and then suddenly there was probing pressure. Manah wanted to fight against this unfamiliar intimacy, but as it continued she became a part of it. She pressed her mouth against his and was consumed by waves of unleashed emotion. Her lips parted, as did his, and she felt his tongue exploring the contours of her mouth. The angel’s consciousness screamed at her to stop, but she had never before felt so blissful. Manah was trapped by the closeness they were sharing.

The ardent kiss continued on until the archangel finally lifted his mouth from hers and, looking steadily into her eyes, he remarked, “That was even more pleasurable than I could have imagined. I believe I have awakened a passion within you, little angel. We are well-suited to be companions.”

Suddenly, a full realization of what had just happened filled Manah’s thoughts. She had revealed her inner desire for this evil archangel. He now knew she felt drawn to him and it could prove disastrous. She must try to convince him that what she had offered was not genuine, but was instead a result of some form of sorcery by him. Manah almost thought-screamed, “Let me go! You have beguiled me with your archangelic magic. I cannot imagine anything more repulsive than kissing such an evil being. You must have cast an enchantment upon me.” 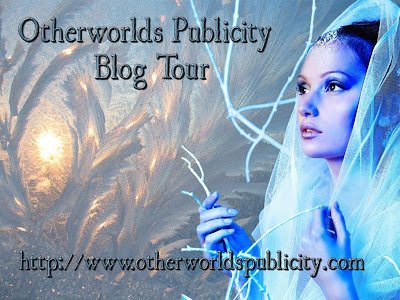 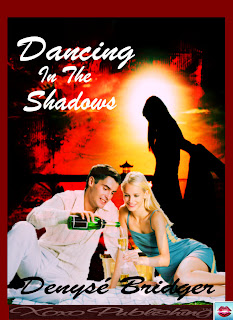 Zach Tyler has been a freelance operative with the Agency for a long time. He's worked with Nicola Paris's father often, and respects him completely. But, there is something about Nicola that's gotten under Zach's skin, and past a lifetime's worth of defenses that were needed to protect him and keep away those he might care too much about from being caught by his dangerous life. But, an unexpected night of passion brings a lot of truths to the surface, and he can no longer deny how much he loves Nicki, or how much she loves him. As their passion explodes in a frenzy of desire, little does he know that the real danger is not from his work, but from the shadow that watches them... and her desire for Tyler might take away the most precious thing in his life now...

Zach drew her head away from his shoulder and smiled into the huge blue eyes. His gaze drifted over smooth, contoured features, admiring with new perceptiveness the striking beauty in Nicola’s face. His look dropped to the slightly parted lips that had haunted him so frequently during the past few days, and he leaned closer to cover Nicola’s mouth with his.

The contact was electric and Zach melted into the caress, his tongue slipping between Nicola’s lips to taste again the tantalizing warmth of her mouth. Nicola met the thrust of Zach’s tongue with hers and drew him deeper into the kiss as she shifted closer to him and molded her body to his. Long minutes later, they broke the kiss with a gasp and Zach looked into the softened blue eyes and smiled.

“Are you sure about this, Nicola?” Every part of him longed to ignore the query, but he truly needed to know that she was certain of exactly what they were contemplating with this change in their long friendship. Zach was already extremely conscious of how badly he wanted to be with her again, but he wasn’t willing to risk regrets on Nicola’s part. He knew in his heart that he was already bound to her, and that he wanted nothing more at that moment than to make this a true beginning for them. But, only if it was what Nicola wanted, too.

Nicola couldn’t trust her voice, her head was spinning with the combination of confusion and excitement. The intense kiss had reawakened the hungry passion she’d felt nights ago, and she was left shaking with the desire she felt for more of the intoxicating contact. She drew in a quivering breath and very slowly nodded, her eyes locked with Zach’s.

“Why?” Why are you pushing this? A tiny voice in Tyler’s head whispered. He heard the answer, as well, but shied away from it just then. The hesitation was voiced before he could think to stop it.

“Because I love you.” Nicola closed her eyes once the words were out, as surprised at having said them as Zach appeared to be at hearing them. “I think I’ve loved you for a long time, Zach. I just never knew anything like this could happen with us.” His hand under her chin made her eyes open again to meet Zach’s dark gaze.

“I love you, too, Nicki,” he whispered. He was almost surprised by how very sincerely he felt and meant the words, then it disappeared in the glow of happiness he read in her smile. His arm was still around her shoulders and he led her to a secluded, dark area of the park.

“Zach, where are we going?”

He laughed at the tiny quiver in her voice, part excitement, and part apprehension.

“You shouldn’t,” he assured her, very seriously.