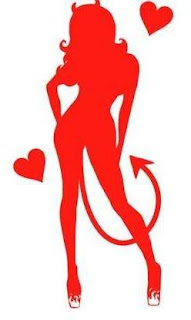 A couple of days ago I posted a challenge on my newsgroup, the idea was to tell a story in a single page, or at least within a 1000 word limit. Few rose to the challenge, but Lisa was one of the ones who did... I loved her story, so here it is.... enjoy!!

Parties. How she loathed them.

It wasn't that she was an unsociable person, just that organised gatherings set her teeth on edge. She much preferred those little impromptu affairs that happened after work. They were so much more fun because they were unplanned and spontaneous.

Why had she agreed to attend?

Katie was normally so reserved, but as a friend had said, Halloween is an excuse to be exactly who you aren't. Still, she was seriously regretting the outfit she had decided upon in a fit of madness.

Taking a deep breath for courage, she hooked the long pointed tail of the scarlet, form-fitting devil costume over her left arm and wandered in to the Heaven and Hell Halloween Hootenanny.

Squeals and whoops from her friends cut through the overly loud bass that thrummed from the speakers near the door. She hoped the neighbours had been invited; otherwise it might be a VERY short evening!

Julie, Christine and Meg fought their way through the dancing, coming rapidly toward her. They all looked far too excited for her liking, her eyes narrowed with immediate suspicion. They were Up To Something, and she had a sinking feeling that the something wasn't ANYTHING she was going to like.

Sighing inwardly she plastered an I'm So Happy To Be Here smile to her face, and just hoped that it looked genuine. Her friends meant well, they really did, but Katie wasn't in the mood for whatever they were planning.

Julie looked fit to burst, Christine and Meg seemed agitated beyond belief, and Katie wondered what had caused this. She mentally listed the reasons they turned into giggling schoolgirls at the drop of a hat–and there weren't that many; Pieter from the corner shop, too much wine and… oh dear God!

Her heart leapt into her mouth as the realisation of exactly what had caused this over excitement hit her.

It just wasn't possible… was it? They wouldn't do this to her, not while she was dressed like this!

Katie prayed for The Four Horsemen–she could do with them arriving about now. Wishing for the Apocalypse might seem a little of an overreaction on her part, but if they had done what she thought they had, the End of her World was truly nigh.

Flanked by Julie and Meg, with Christine bringing up the rear, the three girls steered their friend through the largest spaces they could find. Out manoeuvred, and out manned, Katie gave in to the will of the pack. Their excitement was infectious and despite her best intentions, she found herself caught up in the anticipation of the moment.

A second later her personal guard seemed to melt away, leaving her staring at a broad back. Dressed head to toe in bright red PVC, with long dark hair curling over her shoulders, Katie pondered just how ridiculous she must look; a far cry from the Sexy Devil the costume packaging had claimed she would be transformed into.

Sighing heavily, and just a little too loudly she realised; the back moved and started to turn towards her. This was the bit she hated. The Blind Date revealed.

She had been fixed up with the whole scale of men from no chemistry whatsoever threes, to way out of her league nines and above. From the back, this one looked approachable, but a smidge too attractive for her (on a VERY good day) self rated seven. Dressed like this, well, she didn't want to contemplate his reaction.

Hoping for the best, but bracing herself for the inevitable peels of laughter, she slowly raised her head.

Her gaze took in a firm jaw line–things were looking up, she thought–softly curving lips (no moustache - praise be), on and up into eyes as black as coal.

Fear stagnated her blood as she realised exactly who this was and what he wanted.

He had come for her soul – quite literally.