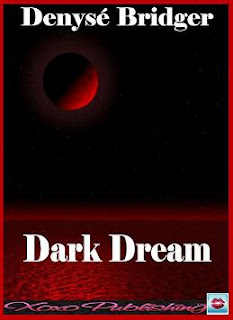 This is one of those strange stories that came about from an actual dream... it was distrubing, but vivid and intense, so I wrote notes when I woke up and knew there was a story to be told when it felt right.... so, what better time than Halloween? XoXo Publishing™ took a chance on releasing this unusual piece, it's part romance, part horror... but I do hope it's entertaining.

She heard the noises that wafted back to her on the breeze, and the scent of blood made her turn away. She threw up in the sand, retching repeatedly. The rhythmic pulsing had now become doubled, two heartbeats, one in each ear–one was growing stronger and the other was dying...slipping into quiescence as she choked and gasped for air to continue breathing.

The night was growing darker. Impossible she knew, but it was happening. Somehow, the light of the moon was fading into a dull steel grey, not the shimmering silver it had been only minutes earlier. When she looked up at it, her mind recoiled in horror as it began to change color again. Scarlet tendrils were seeping downward, the trickle of crimson blood-like, as though the world itself was pouring out gore. Not a gushing sputter, but a slow, leeching kind of death that was going to swallow her sanity before it consumed her life.

Out of the shadows there was once again the sensation of movement. This time she staggered to her feet, poised to run before she died. There was a single moment, between two pulses of madness, when she felt total peace permeate her soul. It was fleeting, but in the span of two heartbeats, she found understanding that she was somehow safer than she had been since she had run, chasing after the handsome boy.

From the murkiness she heard a soft sigh of sound, a whisper that reached into her terrified mind and calmed it.

It was a voice she’d heard before. She did not know from where.

“He’s dead, isn’t he?” Before there was time for an answer, she bent over, arms crossed over her midriff, the sense of being torn in half an anguish that rose from deep within her. “Why?” It felt like a scream inside her head. In reality, it was barely a whisper.

Because your fate was not his, that’s why I am here. To see that you survive.

The answers were spoken in calm, soothing murmurs that drifted to her on the merest ruffle of air. She sat back on her heels and tried to stand, but she was held fast in the shifting, damp sand. Tentacles rose from out of the tumultuous ground and coiled around her ankles, holding her in place.