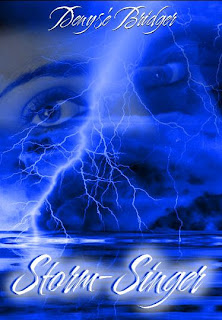 The Isle of Nyx has become the dread of all sailors who must dare the waters surrounding the mythical island. Local legends say a vampire prince resides in the ancient castle that can be seen from the harbor of the island. At his side is a powerful sorceress whose song can control and summon storms.
In a desperate attempt to end the eternal threat looming over them, the people of the Aurora Islands sacrifice their greatest treasure, the princess Sarita, entrusting her with the task of seducing and destroying the dark prince who has been plundering their wealth and their people for centuries?
Read what the reviewers are saying...
"4 Cups!...A tight story full of the undeniable lust of vampires. Their violent couplings add a sense of passion harnessed by sheer will. The hero is dark, but needy, in his pursuit of life?s essence, while the heroine aids her lover by seeking that which could destroy him. They are both master and slave to each other in their love. The storyline captured my attention and would not let up until I had finished."—Katherine L. Hunt, Coffee Time Romance
"4 Angels!...A very quick journey into the Isle of Nyx with a vampire to lust after. Jaden is a very hot, sexy man who easily takes his victims while pillaging for more wealth. Sarita is a brave young woman who knows her people?s fate rests in her hands. Arrah is protective of Jaden but allows him to play with his victims, although she would never permit harm to come to him. All three characters are brought to life in this short tale...Denyse M. Bridger definitely packs a punch with this short, erotic story and this reviewer would love to read a longer tale about Jaden and his illustrious Arrah."—JoAnn, Fallen Angel Reviews
Read a short excerpt...
The back of Arrah's neck tingled, and she sighed. Jaden would soon be making love to his captive. Sarita was falling under his spell, however unwillingly. Lasting jealousy had long ceased to be an emotion Arrah felt when Jade amused himself with those he captured aboard the vessels he plundered. Once they succumbed to his fatal charm, he was like a child who'd won a game. Then he would be looking once more to Arrah's power and ageless allure.
She went inside again, to the small pool of blood and glittering water that rested atop a pedestal in the center of this chamber. Jaden rarely came here, the distinct tang of blood in the air made him restless, and hungry.
Arrah dipped a finger into the cauldron and began to sing softly. The swirl of the tainted waters sped up, and her voice rose with the tiny tempest and reached outward. The sky was growing light, dawn coming much quicker than she?d realized. But there was time. This was a night when her magic would be strong and certain. The moon shone down upon her, bathed her in its spectral light and cool power. She changed the resonance of her song, plunged deeper into the shadows that veiled the answer she needed.
It took much longer than she wanted. Whomever had cast the spell of deception had done it well.
The pitch of her tone altered again, and demanded revelation.
Slowly, as though leafing through pages in a book, the layers of magic began to peel away?