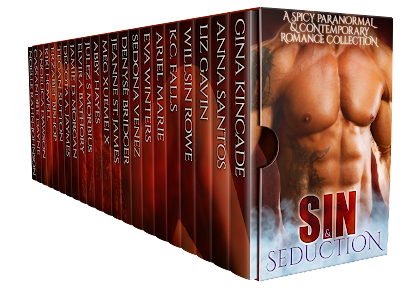 Bursting with sexy-as-sin heros & devilish heroines, our titilating & romantic tales will seduce you and leave you craving more. Get ready for a passionate and exhilarating ride!

Warning: The Sin & Seduction authors suggest all readers ensure snacks and cool drinks are obtained before starting this collection. Once you start, you won't want to stop until the last page. Please read responsibly. Eden Colbourne has spent most of her life pursuing dreams that never quite came true. Running from yet another failed relationship, she seeks solace in the familiar surroundings of England's countryside, and her art. Drawn to the remnants of the abbey, she spends her days sketching the face of a man she believes is a ghost haunting both the abbey and her heart. The reality is even more disturbing...

When Sean Rourke finally reveals himself to her, Eden discovers the ghost is a creature of myth and dark dreams. Turned into a vampire by the man for whom his wife betrayed him, Sean is tormented and lonely, and more afraid of Eden's power to make him love than she is of his nocturnal curse. It isn't until the ancient vampire who made him returns to claim Eden that Sean is forced to decide once and for all if he can let go of the shade of his wife, and permit love to heal what remains of his humanity...

The sketchbook drew her eye, and decided the best form of distraction would be work. She opened the book and stared at the face that smiled back at her from the top page. She’d never seen him before, yet she had filled several books with this man’s image. In fact, she had created an entire history for him. All that remained was a name, and that little detail always stayed just out of reach. No name she settled upon felt ‘right,’ so he continued to be a stranger—a stranger to whom she felt closer to than most of the people who did populate her life.

“Who are you?” she murmured as her fingers brushed across the lightly textured page and absently caressed the curving mouth. She sketched in charcoal most of the time, enjoying the versatility of the medium, and the tactile feel of the paper against her fingers.

Eden nearly dropped the book she held, saving it at the last minute in a desperate clutch. The voice flowed into the air, low and compelling, rich with resonant power. She felt it touch her heart and demand a surrender she instinctively knew had been born long ago. Strangely reluctant, she allowed her gaze to shift from the face on the page and look upward. Her grip lost its strength and the sketchbook slipped to the floor as she stared at him.

Despite the lack of light in the room, he appeared to shine as though the sun itself illuminated his presence. Light within darkness—the thought drew itself in her mind, a separate entity, disconnected from her.

He stood tall, slight in build, and so incredibly pale that blue eyes, like the depths of the after a summer storm, seemed a shocking presence of color within milk-white features and pale, ash blond hair. The blue repeated in the shimmering silk of his shirt. He wore midnight black jeans, boots of the same inky darkness, and the only adornment she could see was the heavy gold wedding band that glittered on his left hand. He stood well back from the fire, yet she had no trouble clearly seeing every aspect of his startling appearance.

“Who do you wish me to be, ?” he repeated, using her name after peering intently at her.

“You know me?” She swallowed hard, the lump in her throat strangling her and making her voice shake.

“You have come here often. I knew each time you entered.”

He paused to consider her query, then shrugged.

“I died here,” he told her with an icy smile. “Exactly one hundred and one years ago.”

Again that thoughtful hesitation before he nodded. “Of a sort.”

Memory woke, screaming through her foggy brain. She knew in that moment where she’d seen him before.

“I saw you, a year ago, running from here.

“A year ago I killed the man who destroyed my life.”

She sensed his agitation when the fire sputtered and shot tiny glittering red sparks into the air near them.

“Do you wish me to put the fire out?”

One expressive eyebrow rose as if the consideration for his comfort came as a surprise. He ignored her question, and took a step away from the blaze. He sat on a corner of her sleeping bag, his gaze still locked intently with hers.

“Who are you?” she repeated with sincere interest, curiosity overriding any fear that lingered. “And how did you come to die in this place?”

“I was killed by someone I once loved.” he replied after a lengthy pause. It was clear he’d considered not answering, then decided he would reply.

Eden tried to calm the erratic flutter in her stomach. Her heart beat so loud, she was certain he could hear each pulse of sound.

Again he took his time before answering. She was surprised when he looked at her again, holding her gaze with his, decision apparently made.

“Because she wanted to be free of me.”

“She?” The single word gasped, and immediately felt both foolish and uneasy when his eyes narrowed. Irrational fear flooded her mind, and the sense of imminent danger began to stir anew.

“You should learn to think before you speak, ,” he advised quietly.

She agreed. Everything about his presence was overwhelming, unmistakable power surrounding him, even though it made no logical sense.

“I didn’t mean to offend you,” she said. “Your... I was merely surprised,” she finished and her look darted away from his too formidable gaze. As if to brand the knowledge into her mind, firelight glanced off the gleaming gold on his left hand.

“Because you have already created a life for me?” He suggested, curiosity and a hint of teasing mockery in the speculative statement.

“How would you know such a thing?”

“I have been here with you each time you have come to visit.” He laughed. “I often wished you would come at night.”

“Perhaps you should be?”