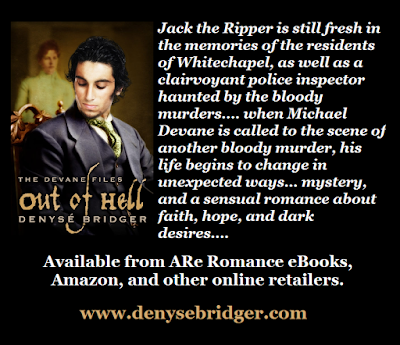 A number of years ago, I began what I intended/hoped would be a series. The central character was a tormented but brilliant police inspector, a man scarred by his involvement with the notorious Jack the Ripper investigation, and a penchant for opium. The two books that introduce the series, a long novella and a short sequel never grew into a series for whatever reason - maybe no one else found Michael Devane as fascinating as I did! At any rate, I like to occasionally remind people of these stories because I do love them and consider them some of my best work. I have the desire to write a new tale, as well, so who knows - maybe he will be back again. At any rate, I hope you enjoy this exclusive excerpt and peek into Michael's world...

Several nights after Goodwin had found him in Whitechapel, Devane was once again walking the streets, contemplating a trip to his usual haunt to meet with the dragon. Somehow, for the first time in years, it wasn’t overly appealing to his senses. The mist and fog that had been the genius behind his work for so long had begun again as a balm to his tortured soul after the death of his only child, a daughter, and his wife’s desertion. He knew he was an addict, yet was able to function in spite of it, perhaps because of it. Still, it was disturbing to the sensibilities he’d been brought up with, and he had pause to wonder for the first time in a long while if it was time to begin the painful process of withdrawal. He’d done it once, he knew he was more than capable of enduring it a second time.

Another typical London night, he noted in an abstract part of his mind as he pulled his coat closer and fought down a shiver. The fog wasn’t as thickly cloying as it often was, and he walked more by habit than actual interest along the familiar streets. Dutfield’s Yard loomed ahead of him before long and he did stop to look at the buildings in the area that had been the subject of so much police scrutiny when the body of the Ripper’s third victim, a pretty prostitute called Elizabeth Stride, had been found in the yard by Louis Diemschültz. Devane had been raised in the Whitechapel district in his earliest years, his parents had eventually escaped the poverty and hopelessness that prevailed in the East End, and it was during the years of his youth that he had often returned to the area. He’d met Liz Stride many times, and she was a beautiful woman who had charmed him in her easy-going manner. There were many people who questioned whether she was, in fact, a Ripper victim, but it no longer mattered to anyone, really. Elizabeth Stride had often reminded Devane of his beautiful wife during their meetings to exchange information for Abberline.

Against his better judgment, he allowed the old memory to surface and taunt him. Liz’s lush, dark curling hair, her beautiful dark eyes, and sensuous curves had been the stuff of his heart’s dreams for a long time. He’d always been fond of Stride, who was his senior by roughly fifteen years, but honesty forced him to admit that he’d fallen more than a little bit in love with the pretty prostitute, and had remained attached to her throughout his life. For the first time in a long time, the ache of her absence, and Evelyn’s, wasn’t quite as acute, and the dulled edges were more bearable. Time was healing his soul of these wounds, too, he realized.

He turned away, and was sincerely surprised to see a closed carriage moving toward him. Not a Hansom, but a carriage of wealth and quality. Seconds later, as the horses drew closer then came to a halt, he recognized the young man on the high seat holding the reins. It was Percival Vaughan, one of the footmen from Bradshaw Manor.

“Something I can do for you, Mr. Vaughan?” Devane asked sharply. The young man had been truculent and sulky from the instant he’d spoken to him, but before the footman could answer him, the door to the carriage opened a small bit and to Devane’s utter surprise, Bethany Bradshaw looked out at him and smiled.

“Sergeant Goodwin said you might be found here, Inspector Devane,” she told him once he’d walked up to the carriage and stood at the door. “Please,” she held out her hand to him, “do come inside, Inspector,” she requested. “If there is someplace you wish to go while we are talking, Percy can take you.”

“Actually, Mrs. Bradshaw,” he smiled and settled across from her. “I was planning to go home.” It was almost the truth, and he left it at that.

“Then we will be happy to take you to your home, Inspector,” she assured him.

“Where to, ma’am?” Percival asked from the driver’s seat above them.

Devane gave him the address, then leaned back in his seat, half hidden in shadows as he studied her for a few moments. She was dressed in layers of black velvet and satin, with demure ribbons the only adornment on the severe dress. Her hat and mourning veil sat on the seat next to her, he noted with curiosity.

“Why did you want to see me, Mrs. Bradshaw?” he finally asked. Her appearance late at night, alone in a carriage in the Whitechapel district was not only startling, it was potentially dangerous.

“I thought it would be easier to speak freely away from my home,” she explained softly. “My father has moved in again and he tends to enjoy interfering in anything that concerns me. I thought you might have questions that would be better asked without his presence.”

A candid and surprisingly astute reply, he thought, revising his initial assessment of her strength of character. She was not typical of most women, to be certain, and he knew there was a great deal more anger inside her than grief. The reasons for her rancor were less apparent.

“Sergeant Goodwin shouldn’t have sent you into Whitechapel to look for me, ma’am,” he said firmly. “It’s hardly an appropriate place for someone like you.”

“I would have thought the same about you, Inspector,” she remarked with a slightly raised eyebrow and a discernible note of challenge in her clear voice.

He nodded, his smile deepening.

“Inspector Devane,” she hesitated, then visibly gathered her thoughts and went on, “you are one of the officers who were assigned to the murders committed here, were you not?”

She looked directly into his eyes, measured the lack of emotion in his response, then bowed her head briefly. “My apologies, Inspector, I can’t even imagine how horrible that memory is for you.” She glanced again at him, adding, “I thought your name familiar when we were introduced a few days ago, but it wasn’t until my maid said something about Jack The Ripper that I recalled where I had read it. The more sensationalist papers are creating tales about Robert’s murder being linked to those atrocities.” She met his eyes fully again, and held their dark depths without flinching, “That is absurd, is it not, Inspector?”

She shook her head impatiently, the action a reflex, and not really an admonishment.

“Anything,” he replied instantly, inwardly startled by how sincerely he meant it.

“Please, call me Bethany,” she said with real weariness. “I could scream I am so tired of polite correctness and formality. It drains the spirit of any joy.”

“How well did you know your husband, Bethany?” Devane asked, using the name smoothly, turning it unconsciously into a verbal caress.

She stared at him for a moment, her cheeks flushed, even in the flickering gaslights that lined the streets and cast momentary illumination into the carriage as they passed them. The reaction to his voice shocked her, and she shivered suddenly.

“Michael,” he inserted softly, with a slight smile. “If you are to permit me to use your first name, then you must do the same.”

“Michael?” She nodded, savoring the texture and sound of his name as though it were a fine wine she tasted. He inclined his head, and she smiled at him, not a fleeting glimpse, but a radiant, bright expression that warmed Devane’s heart. She was a lovely woman, he thought, and a quietly strong person, too, he guessed. Her manners, while impeccable, showed a frustration with constraints of class and propriety. She did not think herself better than others who lacked her wealth and advantages, which was a refreshing change. He liked her, and in that instant learned also that he respected her intelligence and sensitivity.

“I have no illusions about my husband, Michael,” she assured him. “He was often away for weeks at a time, despite being less than an hour from home. I know the kind of women he frequently associated with, as well.”

“Did you love your husband, Bethany?”

The information was irrelevant to the case, but somehow vital to him in spite of that.

As before, she met his eyes candidly, calmly.

“No,” she responded softly. “I did not even like him over much,” she told him. “My father arranged the marriage, though I have wondered many times why he was in favor of the match. Perhaps Robert blackmailed him. I wouldn’t have judged it a thing of which he was incapable.”

He was taken aback by the bluntness of her words and she caught the expression before he could conceal it.

“You’re shocked, Michael,” she mused. “I could shock you a great deal more if I chose to,” she confided. She turned away, suddenly ill-at-ease in the close confines of the carriage. Pain touched her heart, and moved like a spearing dart into her brain. Red hazed her vision, then dissipated; in its wake, cold sweat beaded her brow and she felt herself falling, fading into a peaceful abyss... Devane’s beautiful voice trailed after her, and she tried, vainly, to hold onto it as she fell, but it, too, drifted out of reach...

Devane caught her in his arms as she began to slip from her seat. They were a block or two from his flat and, as he held her, he ordered the driver to get them to their destination more quickly. 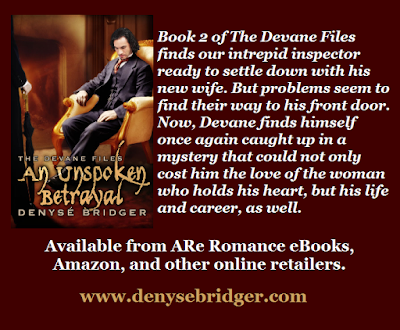