As a fourteen year old, Megan Malone thought Chad Ryan hung the moon, but the boy of her dreams was already a man. Chad left town for seven years. Now he’s back. He’s the new veterinarian in town and he’s working for her dad, in the Animal clinic that she manages. Never mate a dog from your own kennel, so the saying goes, but…


Chad Ryan is a dog. The skinny little girl who used to trail after him like a lost puppy, is now a beautiful woman. He has no business even noticing. On the heels of a failed relationship, and the beginning of his career, there is no time for love in his life.

A matchmaking mom and dad, a boisterous yellow lab and fate have different plans. When it’s dropped in their path, no dog can resist Fetching Love. 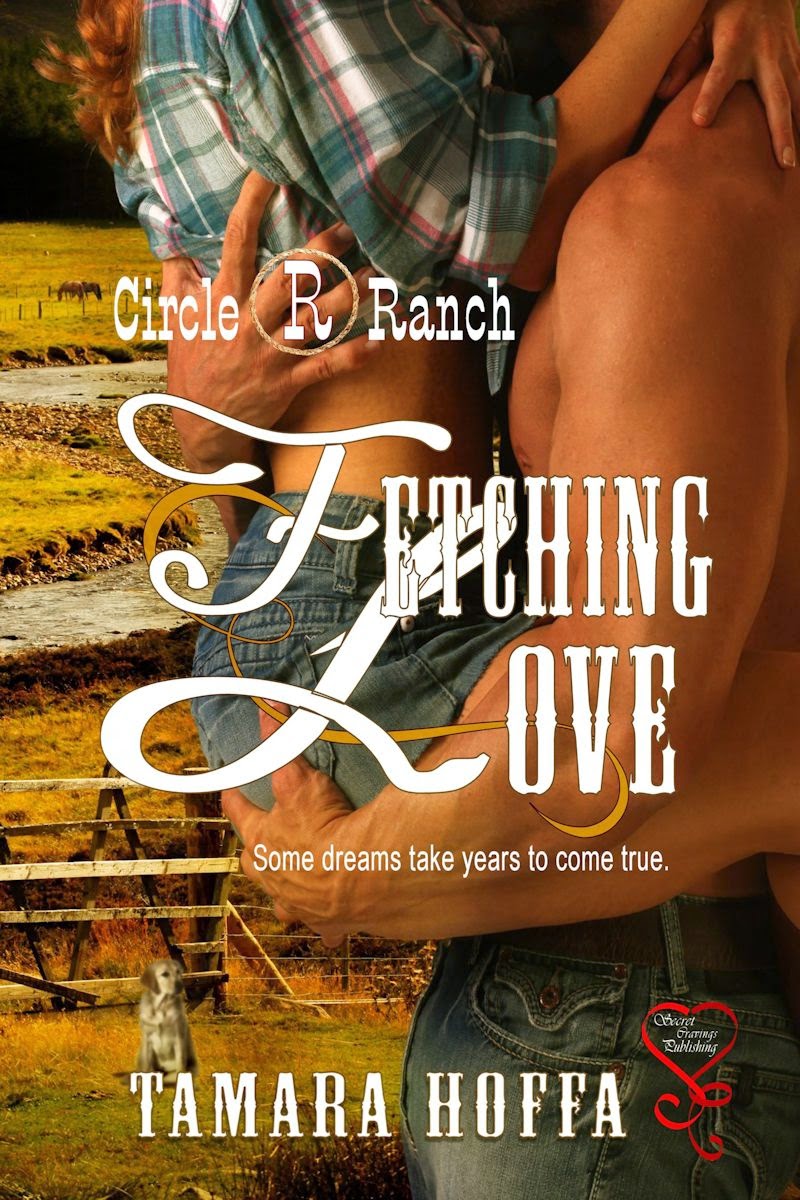 The back door swung open and Chase sauntered in. “Hi, Ma. It smells great in here.” He snatched a slice of tomato from the board in front of her and she slapped at his hand. “Get out of that, you. The tomatoes are for the sauce.”

“You’re making sauce and Sam and I didn’t get an invite for dinner?” He gave her his best puppy dog face.

“We’re having Megan and Doc over for dinner,” Chad interjected before his mother could speak.

“I’m making plenty. I’ll send some home with you and you can make my Samantha some nice spaghetti for dinner.”

Chase looked crestfallen. “Aww, come on Ma. You know I hate to cook.”

“Yes, I know, but Sam has been working too hard and she is big as a house. It’s the least you can do for her. All you have to do is boil up some noodles.”

“I’m telling her you said she was big as a house,” he teased.

Wiping her hands on her apron she placed her hands on her hips and gave her middle son the stare. Chad turned back to his tomatoes so he didn’t get caught in the crossfire. “I beg your pardon, young man. Did you just threaten your mother?”

Chad struggled to keep a straight face, laughing now would earn him a smack in the head, but it was so funny to see his itty bitty mother squaring off with her six foot plus son. Watching out of the corner of his eye he saw Chase drop his head and mutter, “No, ma’am. I was only teasing.”

Chad bit his cheek and continued to peel tomatoes.

“Shoo, you two. Get out of my kitchen. Go eat your lunch in the living room.” She took the knife from Chad’s hand and pushed him toward the door.

He grabbed the bag of food from the table. “Grab us a couple beers, Chase,” he tossed over his shoulder as he exited the room.

They settled themselves on the sofa and Chad pulled the sandwiches and chips from the bag, along with some napkins. “I got you roast beef. That okay?”

They made small talk while they ate. Catching up on the goings on of the ranch and local gossip. When they had finished their sandwiches Chase sat back on the couch, took a long sip of his beer and leveled his gaze on Chad. “Okay, spill. I can tell you have something on your mind, so quit pussy footing around and let me have it.”

“I never could get away with anything around here. I swear, between you, Chance and Ma, a man doesn’t stand a chance.”

“How could I forget? That poor girl had such a crush on you. She followed you around like a little puppy. Oh, no. She’s not still trailing after you, is she?”

Chase stuck a finger in his ear and wiggled it. “Did I just hear you right? You want little Megs following you around?”

“Obviously you haven’t seen little Megs in a while. She’s not so little anymore. In fact, she’s a stone fox.”

“Seriously? So, what’s the problem?”

“I don’t know what to do. She runs the All About Animals office now, we work together. I know I shouldn’t pursue her, but I can’t get her out of my mind.”

“Is she still stuck on you?”

“I really don’t know. She always acts very professionally, but every once in a while I think I catch her watching me.”

“No, that’s not the worst she could do. We work together. What if it doesn’t work out?”

“What if it does? Are you really such a chicken shit that you’re willing to ignore your feelings for this girl because of a maybe?”

“Been there. Done that. Got the broken heart to prove it.”

Tamara Hoffa lives in central Tennessee, with her husband of 30 years, her three grown children, two grandchildren, 4 dogs and 2 cats. Tamara started reading when she was four years old and has rarely been seen without a book at hand since. At home you will usually find her in “nana’s chair” with her kindle, her laptop or one of her precious, precocious grandson’s in her lap. Tamara is an author, a reviewer, an editor, a professional reader and runs the SSLY blog with her best friend of thirty years, Beverly Ovalle. Tamara is proof positive that it’s never too late to reach for your dreams.

Tamara is giving away a copy off any ebook of her backlist to one lucky winner. Fill out the rafflecopter below for your chance to win.