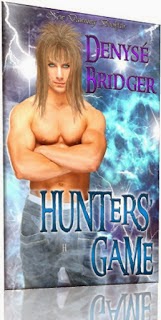 In modern Toronto, two vampires stalk the night, their hunting a game that is seductive and deadly. In a darkly compelling Goth Club, they find the prey they seek for their pleasures, and the night runs crimson with blood and unquenchable thirsts....

Currently 50% off at ARe All Romance eBooks

Mortal heartbeats pulsed in Demetri’s head, an undercurrent to the steady throb of music reverberating through the noisy club. A smile curved his mouth, though none who might have witnessed the expression could ever have understood the source of his macabre humor. Toying with the glass in his hand, his long, tapered fingers stroked the smooth surface, tormenting him with memories of her skin. Clia’s flawless beauty never failed to sharpen his hungers to near pain. His fangs ached, punching through his gums while the remembered taste of her taunted him.

Young people drifted through the room, locked in their own worlds. Youth, wild and insolent, full of deluded certainty that they were immortal and untouchable. They played at death and immortality, but the truth would terrify them. The reality he’d show at least one of them tonight would teach a lesson they’d take to the grave–the price of truth in his world.

He tapped the glass, an unconscious mirror of the pounding music. Cliantha was taking her time joining him, and he wanted her. His muscles tensed, his cock and his fangs ravenous for her, and anger stirred. She was toying with him, and he loved and hated it. He’d lured her from hate to devotion over time. Stavros had chosen a perfect mate in her. Demetri was fascinated by the duality of her nature, sometimes pliant, other times exhibiting a stubborn fury that astonished him. He’d uncovered some of her secrets, but sensed there was much more to know. The only time he could glimpse her mind was when he had her writhing in passion, and from those precious seconds of abandoned lust, he’d pulled hints of betrayal.

A soft, breathless whisper brushed over his senses, and he looked down at the mortal standing next to him. The girl was no more than twenty, and she wore the pale make-up that created a death-masque look that so many of the club’s youth seemed to strive for. Desire sparkled in her hazel eyes. He caught her wrist as she reached out to touch him. Amused with her bold recklessness, he lifted the slender limb he’d captured and stroked the throb of life beneath the translucent surface of her skin. She watched, enraptured, when he bent over her wrist. Her body trembled, and she hissed a gasp of pain and pleasure as his razor-edged fangs pierced her vein and he drank.

Demetri indulged his thirst, but only enough to whet his appetite, not sate it. The girl leaned into him, her eyes dazed. He licked at the wounds on her wrist, and smiled when the soft stroke of his tongue triggered an explosive climax. She twitched violently, her low moan swallowed by his brief kiss.

He ignored her question and released her, turned his attention to the dance floor.

“Go!” When she refused to accept the dismissal, he permitted himself the luxury of inciting fear. He turned to look at her again, and his vision altered, grew sharp and gilded by flames. She gasped at the force of his stare. This time, there was no pleasure in her sharp intake of air.

“Fuck you!” She stood her ground for a few heartbeats, hands on her hips.

“Not interested.” He laughed, and his mental slap made her cry out in pain.

Seconds later, he was alone again.

But she was getting closer...