Blood Wine and Pales Roses is back 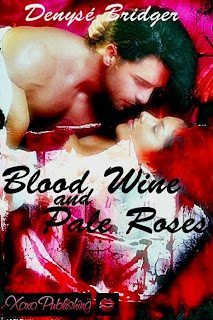 Blood Wine and Pale Roses was originally released a number of years ago, with the Wild Rose Press in their Black Rose category. It was a finalist for book of the year at LASR (Long and the Short of it Reviews), losing by a close 1% of the vote that year. As you can see from the reviews at the end of the excerpt, it's considered one of my best books. XoXo Publishing re-released the book, with a new look - and this is the first look at it in quite some time. The excerpt is new for this post, as well. If you enjoy a good vampire tale, you will probably enjoy this erotically charged story of hopes, betrayals, reawakened trust, and immortal hatred. Now, enjoy a sip of blood wine and pale roses....

Eden Colbourne has spent most of her life pursuing dreams that never quite came true. Running from yet another failed relationship, she seeks solace in the familiar surroundings of England's countryside, and her art. Drawn to the remnants of the abbey, she spends her days sketching the face of a man she believes is a ghost haunting both the abbey and her heart. The reality is even more disturbing...

When Sean Rourke finally reveals himself to her, Eden discovers the ghost is a creature of myth and dark dreams. Turned into a vampire by the man for whom his wife betrayed him, Sean is tormented and lonely, and more afraid of Eden's power to make him love than she is of his nocturnal curse. It isn't until the ancient vampire who made him returns to claim Eden that Sean is forced to decide once and for all if he can let go of the shade of his wife, and permit love to heal what remains of his humanity...

The sketchbook drew her eye, and decided the best form of distraction would be work. She opened the book and stared at the face that smiled back at her from the top page. She’d never seen him before, yet she had filled several books with this man’s image. In fact, she had created an entire history for him. All that remained was a name, and that little detail always stayed just out of reach. No name  she settled upon felt ‘right,’ so he continued to be a stranger—a stranger to whom she felt closer to than most of the people who did populate her life.

“Who are you?” she murmured as her fingers brushed across the textured page and absently caressed the curving mouth.

nearly dropped the book she held. The voice flowed into the air, low and compelling, rich with resonant power. She felt it touch her heart and demand a surrender she instinctively knew had been born  long ago. Strangely reluctant, she allowed her gaze to shift from the face on the page and look upward. Her grip lost its strength and the sketchbook slipped to the floor as she stared at him.

Despite the lack of light in the room,  he shone as though the sun itself illuminated his presence. Light within darkness—the thought drew itself in her mind,  a separate entity, disconnected from her.

He stood  tall and so incredibly pale that blue eyes, like the depths of the after a summer storm, seemed a shocking presence of color within milk-white features and pale, ash blond hair. The blue repeated in the shimmering silk of his shirt. He wore midnight black jeans, boots of the same inky darkness, and the only adornment she could see was the heavy gold wedding band that glittered on his left hand. He stood well back from the fire, yet she had no trouble clearly seeing every aspect of his startling appearance.

“You know me?” It was a whisper of air, uncertain and awed.

“You have come here often. I knew each time you entered.”

He paused to consider her query, then shrugged.

“I died here,” he told her with an icy smile. “Exactly one hundred and one years ago.”

Again that thoughtful hesitation before he nodded. “Of a sort.”

“I saw you, a year ago, running from here,” she realized aloud.

“A year ago I killed the man who destroyed my life.”

She sensed his agitation when the fire sputtered and shot tiny glittering red sparks into the air near them.

“Do you wish me to put the fire out?”

One expressive eyebrow rose as if the consideration for his comfort came as a surprise. He took a step away from the blaze and sat on a corner of her sleeping bag, his gaze still locked intently with hers.

“Who are you?” she repeated with sincere interest. “And how did you come to die in this place?”

“I was killed by someone I once loved,” he replied softly.

tried to calm the erratic flutter in her stomach. Her heart beat so loud, she was certain he could hear each pulse of sound.

“Because she wanted to be free of me.”

“She?” The single word gasped, and immediately felt both foolish and uneasy when his eyes narrowed. Irrational fear flooded her mind, and the sense of imminent danger stirred to life within her.

“You should learn to think before you speak, ,” he advised quietly.

“I didn’t mean to offend you,” she said quickly. “Your... I was merely surprised,” she finished and her look darted away from his too powerful gaze. As if to brand the knowledge into her mind, firelight glanced off the gleaming gold on his left hand.

“Because you have already created a life for me?” He suggested, only curiosity in the  speculative statement.

“How would you know such a thing?”

“I have been here with you each time you have come to visit.” He laughed. “I often wished you would come at night.”

“Perhaps you should be?”

“Do you intend to harm me?”

“I haven’t decided yet,” he answered with a careless shrug. “Your work is quite lovely,” he continued, the threat forgotten already. “You capture likenesses very well. And then you create lives for your images.”

“Older than you think,” he acquiesced with a cool smile.

“Your name has always eluded me. None I have given you have ever felt right,” she admitted with a weak smile.

“What is your favorite?”

He was visibly startled, and she watched him in total fascination.

“It is your name?” she questioned, her eyes wide.

“No." He shook his head, his smile bitter. “My name is Sean. Sean Rourke.”

“What were you in your lifetime, Sean?”

He laughed again, this time the sound filled with disdain and cold contempt. shuddered and turned away from him.

“Some would tell you I was a madman. Others would use words like killer, or monster. Where does that fit into your fantasy, ?”

“You assume you are the object of some sort of fantasy,” she replied with a scornful smile. She felt vulnerable and oddly exposed to this creature, as if his existence challenged hers.

“A dark one, to be sure,” Sean admitted. “But, your passion is revealed in your art, my dear. Your images of me are very flattering. I would love to know what you think as you create them.”

“I think now that I should never have come to this place,” she said. When she would have risen and walked away, she remained stunned into motionlessness by the solid grip of his fingers closing on her wrist. The hold real, not ghost-like, though his touch was cold as death and unnaturally strong.

“Do you think about me as a lover?”

“W-why would I?”. She fell back when he released her with a jerk and settled back in his spot a few feet away.

“I would not be pleasant with you, Eden,” he informed her. “It is not my nature. Now,” he added in a voice inaudible to her ears. Yet, she seemed to have heard him in spite of that.

“You lie very badly.” Sean taunted with a mocking smile.

“I think monster describes you nicely,” she snapped.

“We are beginning to understand each other.”

“What are you, Sean? You are not the ghost I believed you to be.” She rubbed her bruised wrist as she spoke.

Some would tell you I was a madman. Others would use words like killer, or monster. She cringed, the reaction involuntary. He laughed.

Read what the reviewers are saying...

"4 Hearts!...Dark this tale might be, but this reviewer enjoyed it. The characters were interesting and well drawn. Love and bitterness are shown as two sides of a coin. It made a compelling read as this reviewer wondered which side of the coin will succeed in coming out on top. The dialogue is skillfully woven into the story's fabric, making it easy to picture the speaker. The settings are vivid, bringing the places alive for the reader. The story line is sure to please those who like dark tales. Despite the dark side, it is still a heartwarming tale of love eternal." —Pam, Love Romances

"5 Cups!...Denyse Bridger has written a heartfelt story of love and emotional healing. Sean will tug at your heartstrings. His loneliness will creep into your heart the way the sun creeps up on a new day! This book is a definite keeper and I know I will be reading it and revisiting Sean and Eden over and over again. The characters are so true to life and fresh. Sean is a one hot vampire! The steamy love scenes will make you want a sexy vampire of your very own to bite you! I am anxiously looking forward to reading the many new books Denyse Bridger has published this year..."—Janean Sparks, Coffee Time Romance

"5 Angels!...Being a lover of paranormal romances, this story did not disappoint. Miss Bridger has woven a wonderful tale of love and suspense. The plot was well thought out and the story flowed beautifully. Her descriptions are very vivid and I felt like I was really in the story with Sean and Eden, experiencing their thoughts, feelings and actions. One part of the book in particular had me in tears due to the high emotions that were felt between the characters. She provided steamy sex scenes and I was able to really get a grasp on the love felt between both hero and heroine. She also did a very good job in creating the villain, Evander. I could feel the evil radiating off of this character and I loved to hate him. All in all, I don't have any complaints about this book. It had all the necessary elements to keep me transfixed until the very last word. If this is the type of story I can expect from Miss Bridger then I look forward to reading much more from her in the future. Blood Wine and Pale Roses comes with my highest recommendation to anyone who is a lover of paranormal romance or is looking for a new genre/author to try. Bravo, Denyse!"—Jennifer M., Fallen Angel Reviews

ARe All Romance Books