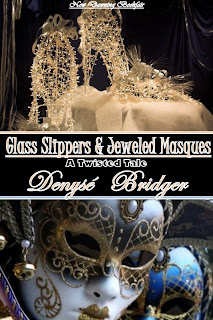 Cindi Lancourte is the illegitimate daughter of a powerful businessman and a lovely woman who worked for him. Acknowledged when his wife died, she was quickly relegated to the role of servant by his new wife and step-daughters, but an invitation to a Masquerade gives this Cinderella a new shot at happiness with a handsome Prince Charming.

"Amerasha needs stability," King Alenzo Coranthaos reminded his only son. "Our future lies with you!"

Michel Alexandros Coranthaos, heir to the island nation of Coranthis, turned from the castle window to look intently at his father. He tried to keep his voice even and free of the irritation that was coursing through his veins like a living thing. "Father, you are in the prime of your years, hardly on the verge of dying of old age. I fail to see why you think it so necessary for me to marry and produce offspring!"

His father's shoulders stiffened at the words and Michel sighed inwardly. He schooled his expression to careful neutrality and waited for the rebuke he sensed was coming to him.

"Why do you think it so necessary to remain unmarried, Michel?"

Startled by the calm question, he took a few moments to seriously consider the question. He could be flippant about it, or he could for a change be honest. The expectancy in his father's eyes decided him and he crossed the distance between them.

"I don't think it's unnecessary, father. I simply choose to wait for a woman I can love and respect, someone I can share my life with, as you did with mother."

Alenzo looked at his son, and nodded, expression grave.

"I wish to see you happy, Michel." He held up a hand to ward off the reply Michel was about to make and smiled, albeit with sadness. "You have played the carefree prince for many years, but there is an emptiness in your life that needs to be filled. Tell me this is not truth? If you can?"

Michel stared, genuinely surprised by the turn of the conversation. He'd answered his father's summons with the expectation of another of their increasingly frequent arguments. Instead, he was being accorded a direct honesty that had once been the core of their relationship, but had often been lacking in years. He sat down and for a few moments he remained silent, then he leaned back in the comfortable chair and nodded.

"There is no sense denying what you say, father. I am not a happy man," he admitted, then laughed with real bitterness. "I don't lack for attention, but it feels very hollow."
Alenzo nodded. "It's time to bring a bride to you, my son."

Michel frowned, and waited for the trap to spring. He should have recognized the change in tactics, his father was a supreme manipulator.

Available NOW from All Romance eBook!
Get it HERE