WINNER of a copy of Douglas Carlton Abrams' beautiful book is LAURIE D. Thanks to everyone who visited!! 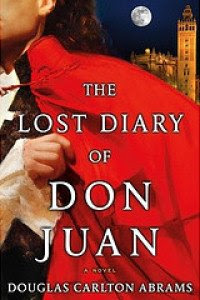 When I was asked to host author Douglas Carlton Abrams on his "virtual book tour" I'd honestly never heard of this book. When I visited the stunning website he's created for it, I was enchanted, and have since spent a lot of time exploring all the wonderful things that are there to be experienced. It's worth a visit, so DO go and discover the magic of this special book, and the equally special author! Just click on the book cover, and you'll soon discover another world. We will also be giving away a copy of this amazing book in a few days, too, so please leave a comment for us, and check back!! You may be the one lucky enough to win a copy of this beautiful book!! Now, my guest: Douglas Carlton Abrams

Was Don Juan truly nothing more than a rapist and a villain? You would certainly think so, judging by how he has been portrayed over the centuries.
From his inception, Don Juan has been depicted as a libidinous scoundrel, capable of rape, misogyny, and even murder. When Tirso de Molina first created the character of Don Juan in the early seventeenth century, he did so as a warning against the dangers of rampant male sexuality and the galanteadores, who were seducing the women of the time. Later, in Mozart and Da Ponte’s opera Don Giovanni, Don Juan rapes a woman and kills her father almost before the curtain even rises.
But would Don Juan have been capable of feeling and doing much more? Male desire can be villainous and overpowering, but it is also multi-dimensional, ranging anywhere from heroic passion to caring tenderness. Any man long rumored to be the world’s greatest lover would certainly have understood these subtler aspects of desire, as well as the unspoken needs of the women he loved.
It is this side of Don Juan’s story that motivated me to write The Lost Diary of Don Juan. I wanted to explore the true nature of love and passion by creating a more complex Don Juan than the one we usually meet. His previous incarnations in plays, novels, and films have only allowed us to see the man from a distance, and we have judged him accordingly. Reading about his life in the form of an historical diary set in Golden Age Sevilla lets us go further into the body, mind, and heart of the man himself. What we find there is far more than an indifferent playboy, but rather a man for whom romance was elevated into an art form, a Casanova with a calling.
This is a Don Juan worthy of far more than mere lust and villainy, a man capable of forming deep and complex relationships with women. This 16th century Don Juan is worth recovering for the 21st century, if only to provide balance in a culture that all too often forgets the true complexity and mystery of desire.