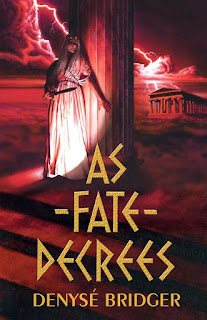 This book was almost ten years in the making. From the time it was conceived and I began work on it, until it was released in 2007, it went through several revisions as I polished it and worked on details. It was tentatively accepted by two New York publishers, but things fell through. I loved the idea of it being released for the turning of the millennium, but the Fates had other plans. I was lucky with this one, apart from one very odd review, it’s been universally praised and enjoyed by readers who have never read a fantasy novel, and by those who go enjoy the genre. At one point last year, it ranked in the Top 50 for genre on Kobo Books. If you like a time-spanning epic fantasy, you will surely like As Fate Decrees. And, it's currently climbing up the ranks at Amazon again, which is awesome to see!!

The gods of ancient Greece must find a mortal champion to defend their fate.


“Go and seek the one I have told you about, she is frail and in need of help. Look not of upper blood, for I have seen her down in the dirt. She is held against her will. Find her and you shall find your savior.” — The Oracle of Delphi

In ancient Greece the young maiden, Amarantha, is captured and sold in the slave market of Athens.

"What fates await?" she wonders. "And what divine design will the Olympian gods have for me?"

As unexpectedly as she had found herself placed in chains, Amarantha finds herself purchased by a mysterious master who refuses to reveal his true identity.

But he is no ordinary man, nor she an ordinary slave.

Under her master's tutelage, Amarantha is trained as a fighter and challenged to prove herself in battle after battle until her skills are perfected and she is granted the right to know his true identity.

He is Ares, god of war and the son of Zeus. And she is to become Champion to the gods of Olympus; bound forever to serve and vanquish all foes until the gods themselves grant her peace.

But even gods are not immune to the fickle twists of fate, and Amarantha is soon ripped from her quiet resting place and cast through time itself to do battle with a modern day reincarnation of an old foe - a madman bent on rewriting history to suit his own twisted desire.

She must act quickly to win this battle, for the fate of all Olympian gods hangs in a delicate balance between immortality and the realization that even the gods themselves may be returned to the dust from which they arose.

For anyone who would like to read the opening chapter/prologue from As Fate Decrees, it's available here