A new release and a fun GIVEAWAY!! #WRWbuzz #RB4U #MFRWauthor 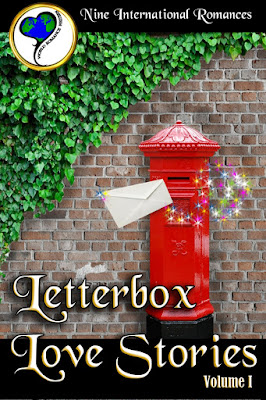 Available at 99¢ for limited time!

What if a life-changing letter arrived in today's mail? Now imagine it leads to love and adventure! From the northern British Isles, across the mainland of Europe, and on to Turkey, nine international romance writers share spellbinding love stories told across time. And each begins with a letter...

Casino Coranthos is a playground for wealthy, bored people, but for some, it’s also a place where dreams and promises change lives forever. When a letter becomes part of an unexpected inheritance for Ryann Thomson, her aunt’s past brings her face to face with Ariston Katsaros, a man haunted by loss and driven by anger. As the attraction between them sizzles and grows, can Ryann convince him she isn’t looking to rob him or his father of anything, or will she become a casualty of Ari’s vengeance? In this dangerous game of all or nothing, her heart is at stake as well as her future happiness…

Stepping from the elevator, Ryann’s ears were assaulted by a surge of noises. The drone of many voices accompanied the bells and whistles of slot machines. She crossed the lobby and the roar of sound diminished considerably. The building was unique, the elite hotel housed in the back of the sprawling structure, facing the azure beauty of the Aegean, while the casino was in the front. It was like two worlds in one contained place.

“Mr. Demetriou has authorized an account for you, Miss Thomson,” the cashier handed her a stack of coins emblazoned with Casino Coranthos in gold on black.

“Thank you.” She took the roll of coins and wandered into the casino’s main area. She’d barely stepped into the bar when a voice close to her ear startled a gasp out of her.

“You must be Ryann Thomson.”

She looked up and was snared by the intensity of dark eyes gazing down at her.

She took a single step back. His voice was pure sin and seduction, something he apparently was well aware of if his smile was any indication.

“You work for Mr. Demetriou?”

For a moment, something flashed in his eyes, so quickly it might have been a flash of the light.

“In a manner of speaking,” he replied. “What is your game of choice?”

“Baccarat.” She tried to keep the smile on her face when the word popped out of her mouth. Too many James Bond movies!

Ariston Katsaros slowly nodded, his mouth curving into a smile. “Then allow me to join you in a game.”

Shit! What am I doing?! Her insides were quivering like someone had unleashed a torrent of butterflies, and she couldn’t decide if it was the handsome man at her side, or the sense that she was about to make a complete fool of herself.

The situation got even more unreal to her when he passed through the main casino and entered a much quieter area.

“Is this where the big money is?” She asked, grateful when her voice didn’t squeak.

“Not really,” he said with a laugh. “It is where high stakes games are sometimes played, but mostly it’s a question of privacy for some of our guests.”

There was an inflection in his tone that eluded her, and she sat when he held a chair for her at the table he’d chosen. She took a moment to look around and her nerves thrummed with tension. There were only a few tables in the spacious room, separated by enough space to make each one private. The one he’d brought her to was in the centre. Her heartbeat began a steady pulse that hammered at her brain for a couple of seconds.

It took a moment to process his words and she blinked. “Vodka martini.”

Ariston’s smooth features transformed into a grin. “Shaken, not stirred?”

Heat rushed to her cheeks, but she laughed. “Why not?”

“Should I call you Mrs. Bond?”

“That would make you Mr. Bond, wouldn’t it?”

The laughter died in his eyes. “Do you have a preference for game?”

One eyebrow arched and he bowed his head. “Well chosen.”

He turned to the waitress who’d discreetly approached them and ordered drinks before sitting next to her. A few moments later the croupier joined them, and the shoe, containing at least four decks of cards, appeared on the surface of the table. Drinks arrived, along with a single dealer, and the game began when the croupier directed Ariston to draw the first cards.

Several hands were played before either of them spoke again.

“What brings you to Coranthos?”

She accepted a third card and held up her hand to stand pat, then smiled at her companion. “I’m here to deliver a gift to the owner, Lukas Demetriou. He and my late aunt knew each other twenty-five years ago.”

For an instant his smile froze. A kiss of unease touched the back of her neck and she turned aside, picking up her drink to avoid meeting his gaze.

“The gift you bring must be very valuable for you to have made such a long journey.”

There was a note in his voice she couldn’t define. Steeling herself, she finished the martini and glanced at him again. “I hope he’ll think so.” She extended her hand to him. “Thank you for the drink, Mr. Katsaros.”

He stood with her, brought her hand to his lips and dropped a light kiss on her fingers. The brush of contact, like a feathery whisper, woke a quiver of response deep inside her. This man was dangerous, at least to her. He was very tall, his inky black hair trimmed and styled to perfectly frame arresting features. Dark eyes, almost the same midnight shade as his hair, were watchful and alert. He saw everything. Despite the casual suit he wore, she sensed a power seething inside him that was on a par with the force of nature.

Also includes: MORE THAN WISHES by Rose Anderson, SEALED WITH A KISS by Lynn Crain, COME DATE ME IN PARIS by Helena Fairfax, ABANDONED TREASURES by Gemma Juliana, SONS OF THE WIND by Marie Laval, CURATING LOVE by Cara Marsi, PLAIN HARRY by Lindsay Townsend, and THE MINSTREL BOY by Jenny Twist

All you need to do is comment something about the Letterbox Love Stories, and in one week I’ll randomly choose a winner. The prize is a pair of handmade summer-themed earrings and a $10 Amazon gift card. Good luck everyone! 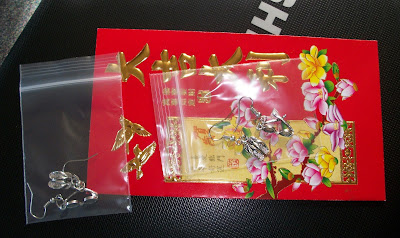 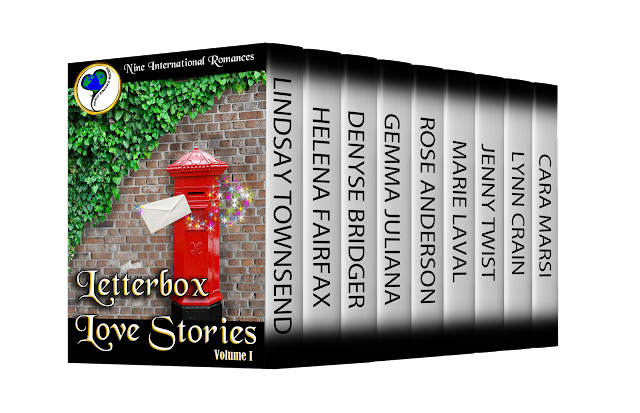