The first kiss... (an excerpt) 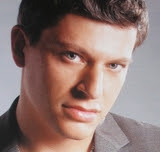 For everyone's who asked about a little more of the novel I'm presently writing, here's a little glimpse of things to come in the story that was inspired by Patrizio Buanne.... A special moment that the romantic in you will love...
* * *
Patrizio Bartolinni watched the sadness coming back into Jillian's eyes, the bleakness that hadn't been there since he'd brought her to his home in Amalfi to recover. They talked more and more about things that he'd never thought to speak about with other women, and he suspected he was hearing things from her that she'd never said aloud to anyone in her life. It was comforting, and the intimacy was something rare and special to him. Not at all like the sexual intimacies he enjoyed with many other women who'd passed through his life in recent years.
He reached over and touched the smooth curve of her cheek, letting his thumb caress silken skin as he waited for her to look at him again. When she did, the pulse of his heartbeat quickened, and he wondered at it for a moment before he spoke to her, forcing his mind to put the words in English, rather than the Italian that flowed so naturally from him when he was caught by emotion.
"No man has the right to take away the beauty of a woman's self-confidence, bella," he whispered, the seductive sound a warm breath that caressed her spirit as much as it reassured her injured heart, "do not let someone so unworthy of you take yours."
Tears glistened in her eyes, and in the afternoon sunshine the moisture that clung to her thick lashes caught the rays like fine crystal. Her smile was tentative and he finally allowed himself to move, to take what he'd wanted from the moment she'd stepped into the morning light and joined him for breakfast. Patrizio's fingers slid into the thick, waving mane of her hair and he leaned forward to touch her lips with his, tasting the hint of coffee that lingered, before he deepened the kiss into something that spoke of passion and awakened desire…
Patrizio Buanne